On February 2, 2014 our dog Banjo appeared on Animal Planet's Puppy Bowl X. How? Well, we were contacted by an agent who knew of Banjo and asked if we'd be interested in pitching him for the PuppyBowl. Banjo is not a puppy, he's two years old, but the PuppyBowl includes animals other than puppies. So of course, we responded with an enthusiastic "sure!".

The stars of the PuppyBowl are the actual puppies which are the "football players". They're between the ages of 8 and 16 weeks and they're all rescues in need of homes. But the show also features kittens; also adoptable, penguins (from a zoo), hedgehogs, and hamsters. Eight adult dogs were featured this year as the partying tailgaters out in the "Barking lot". Those dogs also had to be rescues and had to have been adopted into forever homes. That's where Banjo fit it. After reviewing his photo and considering his credentials (health certificates, training certificates, etc). we got the call from the agent and Banjo was in!

Animal Planet paid for our expenses to go to their studios in New York for the day in October with the other adult dogs. We got to see the playing field for the puppies but not the puppies. The pups and adult dogs were on separate floors of the building at all times - for everyone's health and stress consideration. All dogs were examined before being allowed on set - vets looked for parasites, abuse, general health, and attitude. There was also a Humane Society person on each set at all times. Their job was to watch the dogs for signs of stress to be sure that the entire PuppyBowl experience was fun for the dogs as well as the owners.

The set of the "Barking lot" included two RVs, a few pint sized cars, a fake grill with fake food, some beach chairs and a picnic table. There were three TV cameras on the Tailgating dogs at any given time. The owners had to position their dogs where the crew wanted them and step out of camera range quickly. Once "action" was called, we had to command our dogs to do whatever it was they were called to do (sit, spin, bark, etc). Just getting 8 dogs to work together was at times, difficult, it must have been crazy to have 12 puppies run all over the set during the puppy scenes.

Banjo was the first to get bored. After about an hour of action calls, he would slink off the set as soon as I positioned him and turned my back. Then something happened that reminded me of those old-time dance contests when a couple would get tapped on the shoulder to indicate they were "out". Well, the Humane Society woman came to me and tapped me on the shoulder. "Banjo is done for the day" she smiled. So we took Banjo off set and he cuddled with his bed friend (our other dog) Bo, offset watching the action.

Of course I was concerned that Banjo's TV career was over at that very moment and we didn't get to see any footage until the day of the PuppyBowl airing (Superbowl Sunday). We gathered round the TV with much anticipation when to my delight, minutes into the show, Banjo got one of about 5 solo bark close-ups! You can imagine how we cheered!

Thank goodness he made the final cut because we were also on a segment of the TV news with CBS 3 KYW TV News weatherperson and animal adoption advocate Carol Erickson that Sunday morning at 7:20 AM. After being on the news if Banjo hadn't made the final cut we would have been so disappointed! Here's a link to the TV interview:

I can't even begin to explain the ways that Banjo has enriched my life by helping me as a service dog and the lives of others by volunteering as a Therapy Dog. I had no idea that he would become a star - evening if only for a fleeting moment.

What fun to film for Animal Planet and for CBS 3 in Philadelphia. It was so interesting to learn more about the behind-the-scenes-of TV and in particular, to get a better understanding of the enormous undertaking it is to put on that adorable show called the PuppyBowl.

The following pic from the set of the Barking Lot was provided by Animal Planet TV. The other photo is Banjo along with his best friend and our other rescue, Bo. Banjo is the freckle-faced dog. 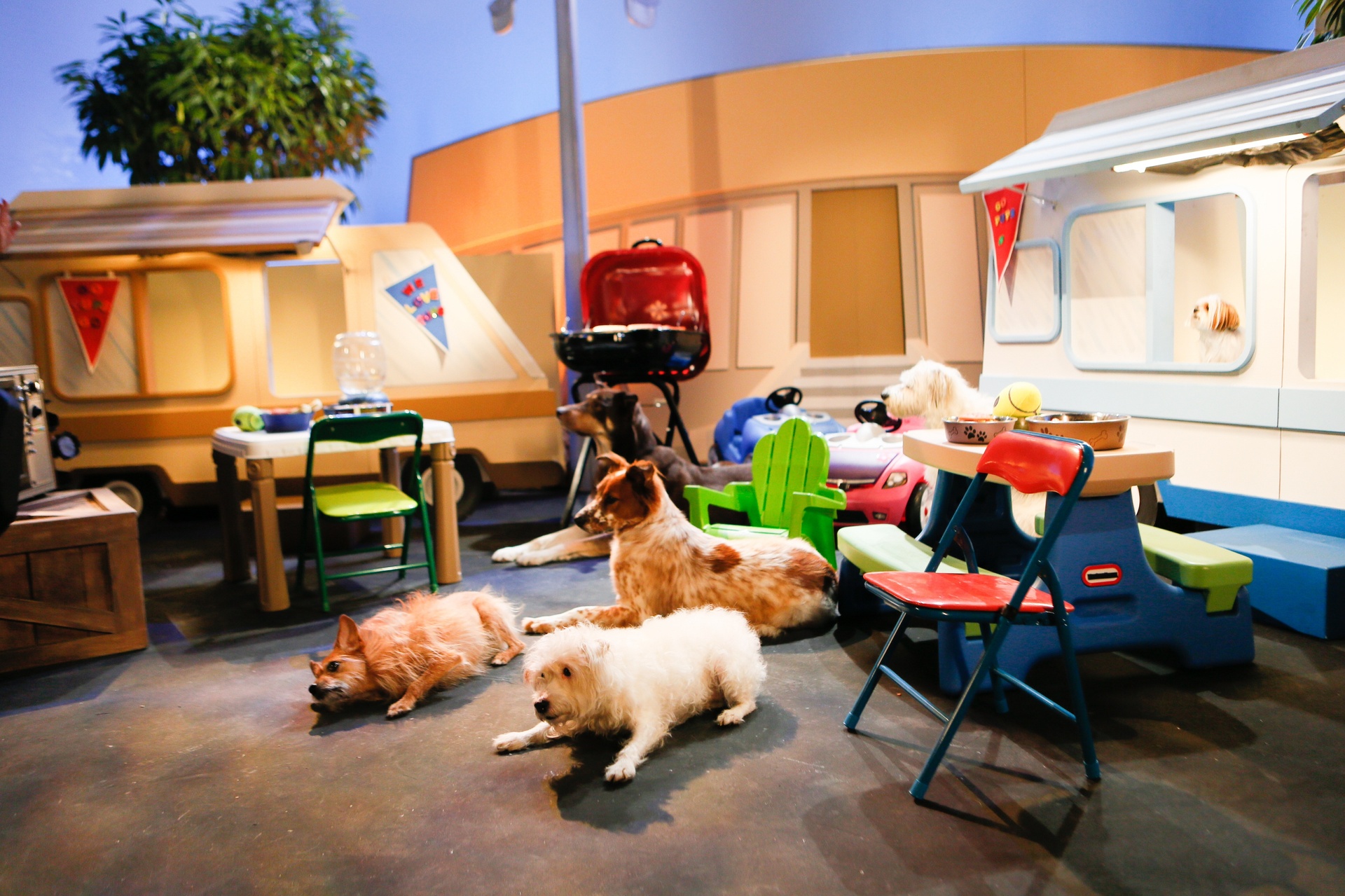