Well, I’ve reached the end of week one of toilet training for Ms. Beanz (almost 4 years old) and Lady Bug (age 4 months). It has been very interesting. Here are the steps I took. I rated and listed the pros and cons of each step. 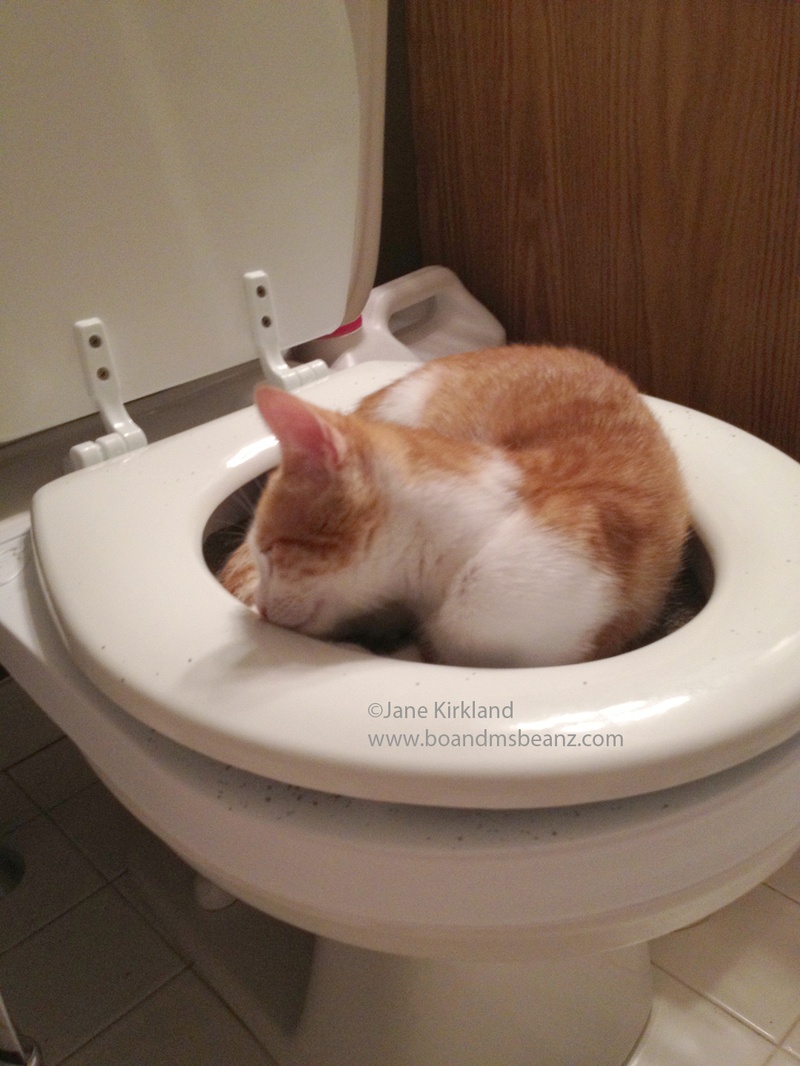 Pros: we looked forward to having to clean one box instead of two.

Cons: we had to keep the basement door closed so the cats would not discover their second litter box missing and then just go potty on the spot it once stood. In addition, one box for two cats gets very messy very quickly. You really have to clean it twice a day or more.

2. Easy but messy. Replace litter with flushable litter. Do this for one week

Pros: soiled litter can be flushed down the toilet

Cons: It was difficult to find litter that said it was “flushable”. I actually found it at the grocery store, which makes it convenient, but I didn’t bother to look there until I had searched all the pet supply stores (duh). We had been using crystal litter and the flushable litter is very sand-like. What a mess! The kitten loves to play in the sand and my bathroom quickly looked more like a beach than a room with a tiled floor. I’m still dealing with the mess one week later. I simply can’t get the kitten to stop playing in it.

3. Easy but nerve wracking After a week of the new litter and new location, remove the litter box and begin using the CitiKitty toilet seat. I chose this system over others based on cost and on the fact that this is a female owned company. Installing the seat is simple. You put it under your toilet seat and put litter in it. After a week, you cut a small hole in the center. Each week you cut bigger (perforated) holes until the insert is the size of your toilet seat. Then voila! Toilet trained cats.

On Friday night I removed the litter box, taped the toilet seat lid open (so it wouldn’t fall on the cats) and installed the CityKitty training seat. I put a small step stool next to the toilet in case the Lady Bug needed it to climb up. I then took a minute with each cat to introduce her to the new seat by placing her in it. I’m training in my master bathroom and I kept my bedroom door closed so the cats couldn’t leave the room. Of course I kept the bathroom door opened.

Cons: Lady Bug thought I’d given her a new bed (see photo). She laid in the litter and every time I took her out, she climbed back in. I worried all night that the cats wouldn’t use it and that Lady Bug would track sand litter all over the bedroom. You can see some sand on the toilet seat.

4. Success! On Saturday morning, I checked the CityKitty box and it was dry. So I laid in bed waiting for the cats to awake and use the box. Sure enough, each one peed in the toilet. About ½ hour later, each one pooped in the toilet (I cleaned it in between them using it). I would call day one of the CityKitty toilet training a success! We will do this for at least one week before we cut the first hole.

Pros: So far, as advertised

Cons: a messy process. Nothing prepared me for the mess. Don’t do this in a place where guests have to use the bathroom! There was kitty litter all over the floor again this morning. Now, in all fairness, it could just be that Lady Bug is a special problem when it comes to sand litter and as this training continues, we will use less and less litter as recommended by the CityKitty people. However, in the meantime, this is a messy process!

This has been inexpensive, easy, and successful so far. My only objection is the mess. But as I said, the process calls for less and less litter over time. You are toilet training your cats and weaning them off litter.